Manga Diaries – One Piece Volumes 7 to 9 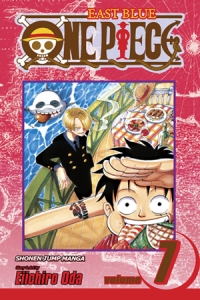 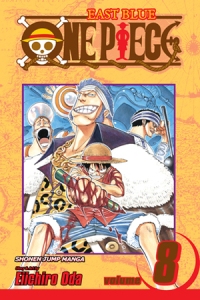 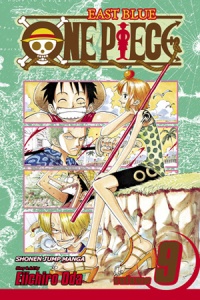 First, Sanji’s only 19!? I would have guessed at least 25. Maybe it’s because he’s a smoker, but he definitely seems older than Zolo.

Anyways, very Sanji-centered volume. We get to see why he defends the ship and his past with Zeff. Obviously this was meant to be contrasted with the Luffy/Shanks backstory. I had to look up to see if people could go 70 days without food. I know humans can last quite a while as long as they have water, but that still seemed on the high end. It seems like 60 days is possible, and reports show that some may have reached the 70, 75 days, but it’s hard to prove. Plus since Sanji did eat for 20 days, he only fasted for about 50 days; that’s still amazing considering how young he was. As for me, I turn into those Snickers commercials when I get really hungry. Plus I can’t imagine how boring it is to spend probably a good 18 hours a day just staring off into the distance.

I thought Gin would have betrayed Don before he did. By the time he defended Sanji, I was half-expecting some honorable death speeches, like how he is Krieg’s shield as Sanji wants to be for Zeff.

Lots of action in this volume, and it can be hard to follow some of the action scenes. Sometimes if feels like Oda shows more of the aftermath of a blow than the actual punch/kick/whatever. Also, didn’t Luffy look like that one kid from Rurouni Kenshin a few times? Eichi or whatever? Especially on page 120. I was like, “Whoa, twins!”

This is a really good volume. The Luffy-Krieg battle is wrapped up, Merry Go gains a cook, and then we get of world building. Three agencies and 7 legal pirates, huh? Plenty of fodder for future volumes. Plus I’m guessing this is a break from the “we need a [blank], there’s one, join up” schtick. I want to spend a little time with these guys before Luffy’s crew grows much bigger.

The tide turns to Nami (a pun! Get it?) here. Is she a cold witch or caring comrade? Of course we all know the answer. Stepsisters, however, are pretty unusual for a manga. Not surprising with all the focus Japan puts on having families. But the “follow Nami” crew has all split up, so there should be quite a bit of activity with everyone pretty much on their own. Well, Luffy, Sanji, and Yosaku are together, but the hero always arrives late, you know.

Lots of stories do the “seems evil but is protecting someone” routine, but One Piece‘s version with Nami is a strong version of the tale. You have a little girl who is forced to grow up too soon, a supportive sister, and an entire village pretending not to know the truth. Nami also shows why she’s so clever, and she’s also kind enough to stab herself in order to free Usopp. (I thought he’d be MIA for a while longer, at least to Luffy and the others.) The Fishmen also show there’s actual different races in the world of One Piece instead of just people with stupid hair. This opens up a lot of potential for the story, but sometimes I find myself wondering if people are using magic or science in their attacks, like Krieg’s bomb swing ability.

Also, while Japanese names are usually real words (or parts of real words put together), most Western names are based on words from long ago. Sure, we have the occasional “Cherry” or “Bunny”, but generally, Romance and West Germanic names aren’t nouns. So it seems really strange to have names like “Belle-mère” in One Piece. So we have a woman whose name really means “stepmother” that also sounds like “pretty mama”. Well, considering some modern names that people come up with (Abcde?!?!?!), I guess it isn’t too bad. Hey, at least Oda’s primary language is Japanese; he has a reason. I mean, there’s supposedly a “Little Sweetmeat” and a “Beberly” out there in the real world, so “Belle-mère” sounds gorgeous by comparison.

One Piece marches along, and it really feels like it is setting up for the long haul in these volumes. I can tell Oda is starting to paint a bigger picture, but it will be interesting to see how long it will take to meet the 7 top pirates. Plus there’s the other two agencies who can be made up of a lot of people. Usopp equipping his goggles also makes me long to read Sket Dance. Please, Viz, it’s a Jump series! I’d settle for omnibus releases!

This post may contain reviews of free products. I may earn compensation if you use my links or referral codes. As an Amazon Associate I earn from qualifying purchases. Please read my disclosure policy here.