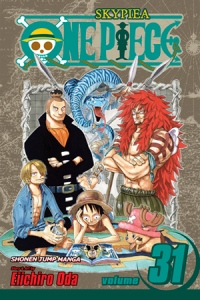 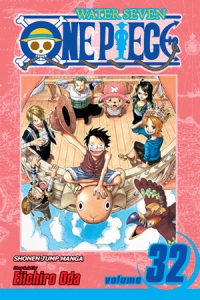 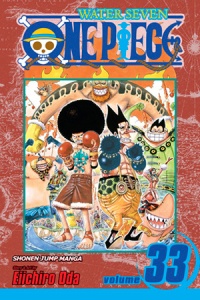 Well, it’s been a while since I’ve read the previous volume. Someone checked it out and decided to return it a few weeks late. -_- So it was a little hard to get back into the swing of One Piece, especially since we’re in the middle of the final battle of this arc. There’s also a pig eating noodles with Luffy on the back cover. Am I forgetting who that is? Seriously, I don’t remember at all.

Anyways, this volume is mostly explaining how Jaya broke apart. Luffy and friends are really secondary to the whole traditions vs progress backstory. I actually really liked this part. It’s a debate that still goes on today (albeit not as extreme in most Western countries).

When I was reading this, I kept getting the “The Sky is Falling!” song from the Henny Penny version done by the cast of The Golden Girls in an episode. Then I realized the perfect song for this volume is “Kimochi wo Tsutawaru” by BoA.

Anyways, don’t you hate when people are like, “Do whatever you want”, and then when you do, they get mad? “You were supposed to do it that way!” “You weren’t supposed to touch that!” Well, poor Noland and crew get this treatment in spades. That’s after they save the town. But I thought naming the snake after Noland was a nice touch to remember him. Nola’s probably one of the happiest main animals considering all the others featured… I kept hearing Arbok’s voice for Nola.

And that one guy whose name starts with a K reminds me of someone. I guess his hair looks like Jiraiya’s, maybe?

Anyways, it’s time for Luffy and crew to do some fancy mathematics and calculate the angle, velocity, and direction for maximum impact to ring the bell. Just kidding. They’re just going to hope for the best.

It’s the Leaning Tower of Vine!

The “Wherefore art thou, Eneru?” may be my favorite SBS letter and response. Just quickly move on.

I’m pretty bad with rides. I freak out on a roller coaster, so I can’t imagine going through a big drop like that. Even the ship itself is afraid. Nice touch, Oda.

Speaking of Oda, is he proficient in English? Or does he have  someone on his team who is? There’s quite a bit of English in this series, and it really is very well.

So we finish up and start the Water Seven arc. Not really sure how three-coins fit in. I mean, if it was a seven on seven fight, you would need four to win. Guess I’ll find out.

Anyways, the Straw Hat Pirates may be pirates, but they would have earned more by honestly collecting a reward. It’s always funny in real-life when people screw themselves out of something.

Poor Shelly! Although what happens to that octoballoon? Does it just live in the sea instead of the sky now?

We also learn about weapons, the next island is a fun house mirror brought to life, and their mission is to find a carpenter. After the opening, it was kind of a boring volume, but an important one.

Man, I want to go to a carnival. My town has a town festival, but there’s no rides or anything. Just some kid’s games and a bunch of food-related contests. Only one year did they have a carnival with rides and stuff. I won a blow-up Scooby Doo and threw up after going on the swings one too many times. (My mom’s fault. At least I made it home before I did.)

That picture of Chopper and the whales is so cute!

Well, the donut race doesn’t involve donuts, soccer with a man-ball is still as boring as regular soccer, and we all know Keroro wears the afro better.

I’ve said it before, and I’ll say it again: I never know Oda is going.

From the preview, it seems like this is just a light-hearted filler arc. The Water Seven starts next time. Not my favorite part. I imagine a carpenter is going to join, but I guess Oda wanted one to a) join quickly, and b) not follow the dramatic joining like the others did. Of course, with how unpredictable this series is, who knows? Maybe he’ll ask for a musician or just tells Foxy to treasure his comrades.