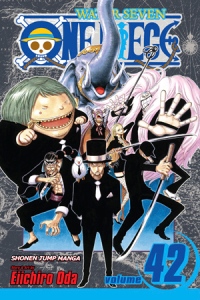 Straw Hats and the Franky Family storm the city. Sheesh, it seems to have more walls than the world in Attack on Titan.

Main thing is that Luffy has leveled up. Nami also has become more useful. Usopp also helps get the giants on their side.

Anyway, this volume is one big game of Castle Panic. Ever play that game? Fun. Except when you draw like a dozen monsters in one turn. Anyway, everyone is just charging ahead.This group is like a superhero army, but members of CP9 are powering up as well.

Robin learns you need to be very specific when you make deals. Go full lawyer-ese.

“Watch off”? Did Oda lose his main English assistant or something?

Robin’s past is finally revealed. While most of the characters are orphans, Nico just had a mother…just not one that was around. So she got stuck in a Cinderella situation. It didn’t explain how she ate the Devil Fruit though.

The best part of the flashback was Saul. I’d like to see more friendly giants like him. He’s also one of the few villains who isn’t so single minded.

Franky has bet on the Straw Hats, and Robin wants to live. Ohara was destroyed for studying the past, and the lead professor makes the insinuation the government is the true enemy of humanity. Maybe a situation a la Valkyria Chronicles? History is really decided by the victors.

I just figured Robin learned archeology (well, more like being able to read the ponegliffs) from her family. She is actually a genius who studied very hard. I mean, I understand why, but she really has talent. I wish I had her brains. I liked how the archeologists were her real family.

Lots of one-on-one and then different one-on-one battles this time. Kalifa ate the Soap-Soap fruit, which is evidently more useful than the Bubble card from Cardcaptor Sakura. Kaku ate the Ox-Ox Fruit and turned into a giraffe? I don’t get it.

I also have been noticing volumes seem to be jumping around between translators. Point versus boost is the most obvious example.

Luffy is finally ready to enter the ring. Nami still has a ways to go, and then there’s the whole Chopper-monster thing.

One Piece was only supposed to last five years? Sheesh, as of this writing, it’s probably going to pass another five years since it’s only about 65% complete. (Translation: this series is a moneymaker and the author and editors don’t want to lose the golden goose.)

I definitely have to read One Piece at a slower pace than most Shonen Jump titles. From a value standpoint, that means more bang for the buck. It’s almost like reading an older title because this series is so fast-paced and paced with panels and jokes. I can see how people can get lost unless they keep up. I’m surprised there isn’t more “here’s where everyone is”-type panels.

In the last volume or two, I think the fun of the arc is starting to lose its luster. It’s just starting to drag with battle after battle. Plus this goes on for several more volumes? I don’t know, I just want to really shake up the story outside of the gang powering up. I want to see CP9 really be Boss monsters and not just mini-bosses. I mean, two enemies offered to release their opponents so they wouldn’t have to share the battlefield. Let’s see how Luffy takes down their number one. Maybe that will add the thrill I need.