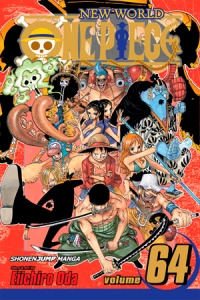 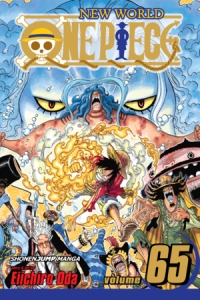 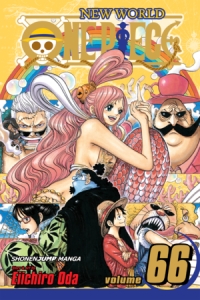 Shirahoshi wins the Biggest Shock Award for this volume. She doesn’t deserve to be constantly called “Wimpy” by Luffy!

This is a really good volume. Jimbei adds a nice opposing dynamic to the Straw Hats’ “let Luffy be Luffy” strategy. The princes fight for their family and their kingdom, and the antagonists certainly are going all-in on the being villains. Lots of action as well as some emotional scenes of people mentally apologizing to their beloved queen and the shock when they learned Hody pulled a Scar. So then everyone’s hoping Luffy pulls a Sailor Saturn.

All the Straw Hats show how they’ve leveled up these past two years. Never underestimate the power of a ladies’ man surrounded by not-too-lovely crossdressers. Chopper, don’t take on your other forms too much! And we all know what kind of shows Franky’s been watching.

I really wish I could see Brook’s seiyuu’s show now. He sounds like a riot.

Chopper! ;_; You will be a monster for your friend!

I don’t get Usopp’s abilities. How does he activate those seeds? They’re plants, right, so will he have to grow more? How do you control them from growing to get more seeds?

This volume feels more like a traditional Jump title. I’m not saying it’s bad; actually, it’s nice not to have about five different groups fighting at once. Everyone’s hearts are one as they put all their hopes on the hero. (Although Luffy doesn’t want to be a hero.) However, Hody is one of the rare villains without some dramatic backstory, some deep personal tragedy. I actually wish there were more of this type of antagonists. Some people are naturally born with screws loose.

Shirahoshi once again proves she doesn’t deserve her reputation. She’s become one of my favorite crybaby-type characters. I also like her brothers, especially Fukaboshi.

I knew Shirahoshi’s Neptunian abilities would be the ace in the hole, but I didn’t realize there were so many types of Neptunians. Unless I was supposed to and I forgot/didn’t pay close attention. They also notice more Luffy/Roger similarities, and the “Promised Day” is still far off.

The Straw Hats should accept being Heroes. Eat at celebration banquets. Take gifts of gratitude. I mean, yeah, you could just steal everything anyway, but haven’t they learned by now there’s a 90% chance of meeting people they’ve met before? Better to have them as allies than enemies. Then they go to banquets anyway…

I think I forgot to mention this before, but I hope “Joyboy” is a nickname. O_O

So the “Ancient Weapons” are actually beings? Or at least one is. Huh. Now I’m imagining FFVII-style WEAPONS.

I didn’t realize it was Tashigi on the cover. I liked her old design better.

I liked the Fish-man Island arc. Nice battles + bit of info about the big mystery + everyone shows off + not too long = good arc.

I wonder how long it will be until Jimbei joins up. Plus there’s the whole “Sanji disappears” arc yet to come, so I have no idea if these are related. I kind of thought Jimbei would join, but I figured he’d pull a Vivi in the end.

The Log Poses also seem to make less and less sense. How does everyone just give these things away? Wouldn’t they be hard to make? I don’t understand…

This post may contain reviews of free products. I may earn compensation if you use my links or referral codes. As an Amazon Associate I earn from qualifying purchases. Please read my disclosure policy here.