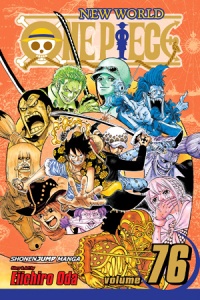 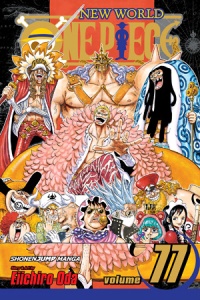 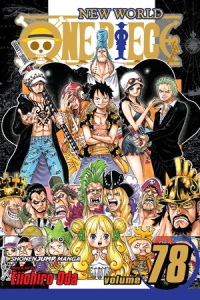 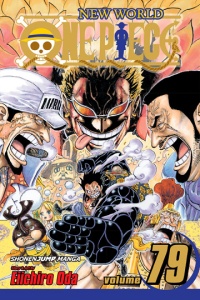 Whoo, final manga diary for One Piece! For now, anyway. You know what happens the day after the diaries are completed? Volume 80 comes out! As I said before, there’s still a few days left before Halloween, but the ride is still going on!

On to the show.

I was expecting Taffy’s (yes, I know that’s “wrong”) backstory to lead off this volume, but One Piece is full of the unexpected. His and Doflamingo’s past is really dove into here at the end, and it’s expected to continue to the next volume. Both men have special parents who were honorable people, but their families were hunted down by people full of rage and prejudice. Unfortunately, it happens all too often in history. Even in modern times many of the rich believe themselves to be above the law, sick people are discriminated against, and officials hide the truth. Doesn’t give them the right to mess with others’ lives though.

Doflamingo’s brother speaks just to tell Law to stay away from Dofy. There’s that “D” again.

Anyway, Usopp once again gets a moment of glory with his Giant Grown-Up Kabuto. Other Gladiators help Luffy. Kanjuro appears with his crappy “come-to-life” art. The Doflamingo battle is just warming up.

Oh, and that one lady looks like a uh, deluxe-sized Harley Quinn.

How interesting! The mangaka of My Hero Academia once had a One Piece fanart published. Guess he likes tough guys since the picture he drew was of Smoker. I own My Hero Academia, but I haven’t read it yet. (What the heck?!) Naruto also ended as this chapter was published in Japan. I guess it’s really hitting me at how close I am to catching up.

When I read Diez Barrels’ name, I first read “Diez” as “Deez” and automatically added “Nutz” to his name. Deez Nuts was actually beating Jill Stein in polls in Texas. (That’s not a real person, but I wouldn’t be surprised if someone was or will be named that someday.)

This volume in a nutshell. Two brothers who walked very different paths.

Still loving Bartolomew, the Straw Hat fanboy. I hope somebody got some snail footage so he can decorate his room with all the images of him near/with the gang.

I nearly forgot the search for Mansherry (ugh, what a name). She reminds me of Primera from Magic Knight Rayearth. Leo needs some lessons in a girl’s feelings.

I can’t imagine losing a child. There really is a reason everyone acts so bizarre in this series…

Luffy goes into Titan form with a lot of weird-sounding attacks. But the names are still more impressive than Doflamingo’s “Athlete”. In a world of Engrish named attacks, “Athlete” just doesn’t have the same punch. “Mwa ha ha, I’m a super-strong wannabe devil and I’m going to pound you to the ground! ATHLETE!” “Take this! ATHLETE!” “Die! ATHLETE!” It might sound more impressive if someone was named Athlete.

Law tries to fake out Doflamingo, Kyros and Zolo win, and Bellamy finally gives up. Nothing wrong with saying you made a mistake, Bellamy. Sticking to one choice to the end isn’t always good or smart.

Zolo had a tough time, but Pica didn’t turn out to be the Hydra from Hercules. Although I bet he wishes he would have stocked up on Gold Needles before arriving in Dressrosa. Never cheap out and skip buying Gold Needles.

I share my birthday with… Ryuboshi. Don’t really remember him, but I know he’s a Fish-man. Shirahoshi’s brother?

Anyway, we get to check in with Team Sunny. But does that mean Sanji disappears again? I’ve only heard about Sanji disappearing, not the others. I think I remember hearing rumors that people thought the “San” in “Sanji” stood for three or something? I don’t know.

Doflamingo is finally defeated after Luffy is forced to Regen his Haki to an appropriate level. Couldn’t use the “open the PlayStation disc cover and wait” trick unfortunately. Other Gladiators and townspeople deserve a lot of credit for stalling. Luffy has to go all King Kong on Doflamingo to win. Giant monkeys > pink birds.

The townspeople want Riku back. That was nice.

Anyway, the legendary Kaido is a suicide freak? Um, okay. Will he be happy about being attacked, hoping he can finally die? I’m sure it will be quite a while until I find out.

Sabo had amnesia. Not too many stories can pull of the amnesia plotline well, and I don’t think One Piece is one of them. But I guess Dragon really keeps the fact he has a son under wraps, as Sabo only saw a picture of Ace (and remembers Luffy) after he died.

I’m done, just in time to finish (or mostly finish) Dressrosa! I thought that the fight against Doflamingo would drag out a bit more even though Luffy said 10 minutes. Long time no see, Sanji and crew!